​The history of Stockton Parish Church (SPC) is one characterised by growth. God has been doing amazing things in this place for at least 1000 years, and we are excited to see what he will do next!

Pre-1235
The town of Stockton, or ‘Stoctun’ as it was originally known, dates back to Anglo-Saxon times, and the Church has been a central part of town life since the beginning. The name ‘Stoctun’ means ‘a settlement belonging to a monastery’, and quite possibly refers to St Mary’s at Norton, which was the primary place of worship for the people of the area for many years.

However, the population of Stockton grew so much that between 1235-7 a ‘chapel of ease’ called St Thomas’ was built in Stockton, literally to provide the people of Stockton with an easier, closer place to worship. However, the congregation soon grew too large for the chapel, and the chapel fell into disuse as it was insufficient for the needs of the town.

1663
However, in 1663 Revd Thomas Rudd, vicar at Norton, was given responsibility for the chapel of St Thomas’ and for 50 years he oversaw the raising of funds for a new, larger church that would meet the needs of the town.

1712
This new church was called Stockton Parish Church. It's foundation stone was laid in 1705 and it opened on March 20th 1712. Thomas Rudd preached his first sermon at SPC on a passage from Isaiah 56:7: ‘My house will be a house of prayer’. This speaks of the aspirations of those who commissioned it and SPC is a place where people have come to pray and to worship, to learn and to study for over 300 years.

Now
By the early 2000s, SPC had experienced a decline both in numbers and in hope. The church was on the verge of closure when Revd Alan Farish arrived as the vicar. Under his leadership, SPC has experienced huge growth, from 30 or so to over 250 gathering to worship Jesus every week, including people from over 20 different nationalities, and people of every age and background. We continue to grow and develop under our present vicar Revd Mark Miller’s leadership, and are excited for what the future holds for SPC. 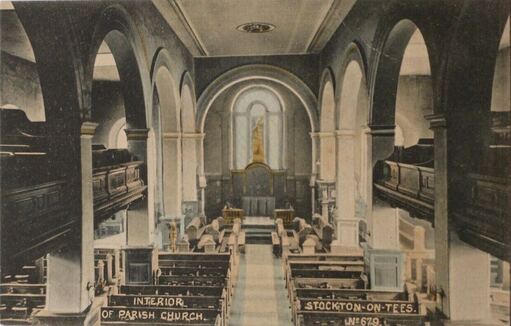